Looking back on a major Supreme Court term 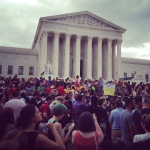 A crowd gathers outside the Supreme Court after the same-sex marriage ruling, June 26, 2015.

The Supreme Court’s 2014 term is over, with the court issuing a flurry of major rulings on same-sex marriage, Obamacare, the death penalty and housing discrimination, among others. Here are a few of the stories I wrote on some of the biggest cases and the court as a whole toward the end of the term:

How Wall Street came out on gay marriage [story]